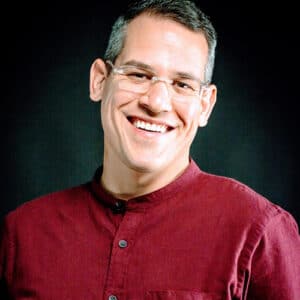 Juval Porat, M.Arch., was born in Israel and moved to Germany with his family as a child. For high school, he returned to Israel, where he studied at the Bnai Akiva Yeshiva. Back in Germany for university, he earned a master’s degree in architecture, and worked as an architect in Berlin.

While in school, Juval served as a cantorial soloist at several congregations. The passion for singing and service leadership bred by those experiences led him to pursue cantorial studies at the newly established Institute of Cantorial Arts in Berlin, part of the Abraham Geiger College. He spent his final academic year at the Hebrew Union College in Jerusalem, where he wrote a thesis on the development of the Friday evening liturgy in Germany, and in June 2009, was invested as the first cantor to be trained in Germany since World War II.

Wherever his wonderful voice is heard – from the bima, in his self-produced Cantors Concert and cabaret-style show, in Purim drag, on YouTube, with BCC’s choir or BCC’s children – there are always new pleasures and surprises. Cantor Porat’s talents truly help make BCC a home. In 2012, Cantor Porat produced a celebratory concert and CD in honor of BCC’s 40th Anniversary.