Robin Berkovitz & Laurie Newman Serving the public professionally and as volunteers for more than two decades, Robin as a trial lawyer for the LA County Public Defender’s Office for 21 years and Laurie on the staff of Senator Sheila Kuehl for 14 years and serving on numerous non-profit boards and political campaigns with the HARRIET PERL TZEDEK AWARD

About the BCC Awards Brunch

The BCC Awards Brunch recognizes and honors people who have demonstrated extraordinary community leadership and made significant contributions toward tikkun olam, repair of the world. BCC values the opportunity to honor such leaders, whether in our own congregation or from the community at large. Funds raised by the BCC Awards Brunch are crucial to sustaining our synagogue’s vibrancy and to furthering our bridge-building between the broader Jewish and LGBT communities. 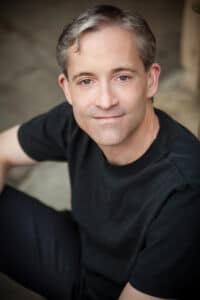 David Codell is a nationally recognized expert in civil rights law and constitutional issues who maintains his own law practice and serves as Visiting Legal Director of the Williams Institute, the nation’s leading LGBT think tank, housed at UCLA School of Law. David’s advancement of groundbreaking legal theories to protect the rights of LGBT people led a renowned constitutional law professor recently to describe him as “one of the foremost legal minds of his generation.” He represented students in the first case in the country in which a court ordered a public school district to permit a gay-straight alliance to meet on campus and was lead counsel in a historic series of lawsuits upholding California’s comprehensive domestic partnership laws. Perhaps most memorably to the public, David served as co-counsel in litigation resulting in the California Supreme Court’s 2008 ruling that California’s Constitution requires that same-sex couples be permitted to marry, following up with the litigation upholding the validity of the 18,000 marriages of same-sex couples that occurred before Proposition 8 was enacted. In the marriage cases now pending before the U.S. Supreme Court, David co-authored a friend- of-the-court brief on behalf of Williams Institute scholars and leading women’s legal groups, explaining that laws that discriminate based on sexual orientation frequently are impermissibly based on gender-based stereotypes about women’s and men’s roles in relationships. The brief has been described as “paradigm shifting.” Read it here Even with credentials that include two Harvard degrees with high honors and a career that has included serving as a law clerk to U.S. Supreme Court Justice Ruth Bader Ginsburg and practicing constitutional law in association with Harvard Law School Professor Laurence H. Tribe, the most impressive aspect of David’s career is that he has provided the bulk of his legal assistance to the LGBT community over the last fourteen years on a pro bono basis—continually donating his skills and passion to the LGBT community both here in California and across the nation, in the conviction that lawyers should give back to the communities in which they live. For his path-breaking work and commitment to justice, BCC is honored to present David with the Rabbi Erwin and Agnes Herman Humanitarian Award. RABBI ERWIN AND AGNES HERMAN HUMANITARIAN AWARD Recognizes individuals and organizations that have made outstanding contributions to the LGBT and Jewish Communities. 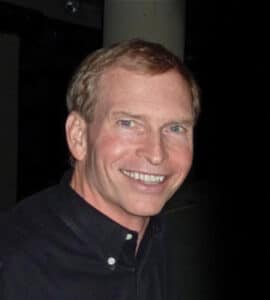 It’s Purim, mild-mannered Ray Eelsing takes the stage as a sword-wielding Samurai enacting the moment Esther confronts the King – in fluent Japanese! How can that be? Having been raised Mormon, Ray served a two-year mission in Japan! After graduating magnum cum laude with high honors from Brigham Young University in chemical engineering with a minor in Japanese, he went on to a career as director of international sales and marketing for companies that took him to Japan, Asia, and throughout the world. Ray found success at Black & Decker, Springs Industries, and a software start-up, but the job that changed his life was his first: Exxon Chemical in Houston, where he met his life partner, Ed LaFuente. Exxon transferred Ray to Los Angeles, where he and Ed remodeled the lovely beach home they lived in together for 20 years. In the 1990s, Ed began studying Judaism, joined BCC, and in 1997—with Ray by his side—entered the covenant. In 2001, Ray and Ed began facing serious threats to their health. After suffering a pulmonary embolism and two strokes, Ray was diagnosed with a rare blood disorder. Medication compromised his spine, resulting in nine crushed vertebrae and causing him to be bedridden indefinitely. Meanwhile, complications from AIDS had been eroding Ed’s health, and in May of 2002 he passed away. Ray’s life as he’d known it was over. Following two back surgeries, embarking on lifelong physical therapy, and with BCC an integral part of his newly emerging life, Ray began a slow recovery. As a BCC member, he found relevant and healing ways to take part in the community Ed had loved. Ray co-founded BCC’s Bereavement Group, served as board member and treasurer, and having become a certified specialist in planned giving, cofounded the L’Chayim Legacy Circle. He was a founding member of the Telephone Minyan, worked on BCC’s capital campaign, and oversaw much of the technological installation in BCC’s new temple. He co-chaired six silent auctions and has sung in the choir since 2007. Additionally, Ray has long “called Bingo” for the elderly residents of Santa Monica’s Ocean House, served on GLAAD’s theater committee, and was a board member of the Planned Giving Round Table of Southern California. In 2008, while attending Chicago’s LGBT synagogue Or Chadash, Ray was introduced to the man who would become his new life partner—Mark Maroney, here today with Ray’s dearest friends and family. BCC PRESIDENTS’ AWARD Commends outstanding BCC members for their dedicated service and leadership within synagogue life and the community at large. 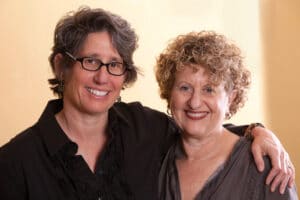 Robin Berkovitz and Laurie Newman met at a Shabbat service at BCC in 1997. From that meeting, they have built a life together, along with their daughter Eliana. The Berkovitz-Newman home in Venice is welcoming and comfortable, and infused with the values of justice and giving back. Robin has a long history with BCC joining as a young adult back in 1985. She is currently on the board of directors, and has served on the ritual and children’s committees, and given fundraising pitches and sermons. Robin is a dedicated Jew and can be depended upon to lead Shabbat services– which always include her guitar playing and singing, and each year she organizes the high holyday lay-led torah service. Robin has been a trial lawyer in Los Angeles County’s Office of the Public Defender for more than 21 years. Robin’s work involves all areas of criminal defense including capital litigation and felony trials, and she has served as a supervisor in juvenile court. Robin has considerable experience defending juveniles and people with mental health and addiction issues. While Robin has tried over 70 jury trials and has handled high profile cases, she is most proud of having the opportunity each day to stand up for the weakest and least powerful members of our society, giving them a voice in the criminal justice system and zealously protecting their rights. Robin remains with the County public defender’s office and has no plans of leaving for private practice because she believes she has the best lawyer job there is. Laurie is currently retired and enjoying being a “fulltime” mom, a passionate environmentalist, an artist, a gardener and the President of the Santa Monica Bay Restoration Foundation. Prior to retiring, Laurie served on Senator Sheila Kuehl’s staff for 14 years. In her work for the State Legislature, Laurie’s main areas of focus were transportation and the environment. The pieces of legislation that Laurie is most proud of are SB 1381 that created the Santa Monica Bay Restoration Commission in 2002 and SB 504 that established the Exposition Metro Line Construction Authority in 2003. Laurie came to the Senator as a local activist; previously having worked professionally as a Chef for 13 years. She has always been a feminist and cares deeply about justice and human relations. Laurie has worked on numerous political campaigns and has served on several non-profit boards dedicated to social justice, and women’s rights. HARRIET PERL TZEDEK AWARD Honoring the memory of Harriet Perl, z’l, BCC member for more than 35 years, and fierce advocate for justice, this award pays tribute to members of our community for their efforts toward a just society.

If you are attending our event for the first, you won’t want to miss our amazing silent auction, including stunning art; vacation homes; Tickets to music, theater, and sports; gift certificates to some of LA’s finest restaurants; and all sorts of special health, fitness, and beauty treatments. The 2013 Silent Auction Catalogue Please consider donating or soliciting high quality items to our event. Click on the forms below! Or contact our Auction Chair, Arlene Weinstock: auction@www.bcc-la.org

BCC’s Cantor will be making a very special surprise showing uniting with Ms. Chalin in song!

BCC’s Cantorial Soloist from 1992-2007, Fran remains a beloved presence at BCC. Her musical talents and expertise extend from Klezmer and Yiddish genres to liturgy, all infused with transcendent beauty and soul.

Cantorial Soloist of Congregation Emanu-el of San Francisco A former songleader at BCC, Marsha has helped transform the American Jewish music landscape with her spiritual and inspirational interpretations of traditional songs and her original compositions.

Five Head Table sponsorships are available, 3 for Honorees and 2 for Clergy. You may sponsor a Head Table at either the Diamond or Platinum level. Please contact Felicia for availability.

• Table for 10 (Diamond Seating) • Two facing Diamond pages in Tribute • Journal, or inside front/back cover or outside back cover • Most Prominent Listing on all print and web materials • Corporate logo placement available • Premium Champagne at Table • Complimentary Valet Parking

Congregation Beth Chayim Chadashim, “House of New Life” is a progressive and diverse community that celebrates Jewish faith and culture. Established in 1972, we are the world’s first synagogue founded by and for lesbians and gay men. Today BCC is an essential element of the Los Angeles community, welcoming all who seek a comfortable and warm place to worship, learn, socialize, celebrate, and engage in the Jewish concept of tikkun olam (betterment of the world). BCC’s Annual Humanitarian Awards event was established in 1985 in order to recognize and honor those leaders who have made major contributions toward tikkun olam. The event has grown significantly in size and importance since its inception, and is now BCC’s primary fundraiser. Proceeds raised are crucial to sustaining our synagogue’s vibrancy and to further our bridge building between the broader Jewish and LGBT communities. Questions? Contact Felicia Park-Rogers